Andrew Tate Is Spreading Sexist Opinions Which Can Lead To Violence Against Women, Says An Expert About The Kickboxer.

The ex-kickboxer is gaining popularity thanks to his controversial statements. We asked an expert Veronika Valkovicova how it is possible that his opinions have become so popular nowadays.

"When my wife was making $100,000 a month, I gave her 25 percent of the money she earned. She got 25 thousand and I got 75 thousand. Some people tell me that this is an extortion and why I paid them so little. Little? I'm the genius who thought it up, I'm the technological backer, I'm the emotional support, I'm the one who told her what to say and do. She's just the face of it all. I'm the feminist," laughs Andrew Tate in the video.

Andrew Tate has outraged millions of people around the world with his controversial views on women, business and success, but he usually targets young men in particular with his views. 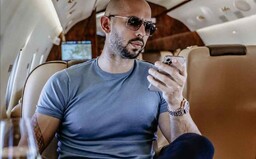 Tate, a former kickboxer who got his ass kicked by a Slovakian fighter at a tournament in Žilina in 2014, now runs a business featuring naked women showing themselves off for webcams to customers from around the world, and he wows his audience at Hustler's University, where he "teaches you how to be successful and how to seduce women."

Through his fans, Tate spreads views that many label the epitome of "toxic masculinity" and "brainwashing," makes aggressive comments about women, and shapes the idea of the "proper man" in the minds of young men.

We therefore reached out to educator and researcher Veronika Valkovičová from Comenius University, who evaluated for us the influence Tate can have on his followers and to what extent he is able to feed his views to people so effectively that they could translate into harassment or attacks on women in reality.

Many men and even women find him attractive

Women are worse drivers and Tate doesn't feel safe with them in the car, women are just property to him because property needs to be protected just as much as your dudes. He wouldn't give a second of his time to women who think they are equal to men. These claims are repeated in the controversial kickboxer's videos.

According to Veronika Valkovic, this is undoubtedly sexism, but sexism also has its different forms. "Hostile or hostile sexism manifests itself as open intolerance towards women, incitement to violence against them or degrading them - these are values and attitudes that are increasingly rare in Europe and North America, and fewer and fewer people are openly espousing them," the researcher explains.

In kind sexism, they seek refuge in uncertain times
However, this aggressive type of sexism is increasingly being replaced by kind sexism, which outwardly appears as an effort to care and protect. "Kind sexism also assumes that there is a hierarchy between men and women, but it relies more on women's inabilities and says that men should compensate for these inabilities," Valkovic continues. She illustrates it, for example, with the idea that "women shouldn't bother their pretty heads with technology."

According to Valkovic, affectionate sexism permeates society much more easily than a more aggressive form of sexism because many people may find it attractive. In a hierarchy where women are "pretty and nice" while "men do", many seek refuge in uncertain times, according to her.

"For men, it can be attractive because it defines a clear and important place for them - those who know and those who protect. For many women, too, the position can be attractive - in an unstable and dangerous world, it's nice to have someone defending them. Women who perceive themselves as the 'weaker sex' may be inclined to such attitudes," she says.

Andrew Tate is currently not the only one who provokes with his opinions on women, gender identity or feminism on the Slovak internet. The modus operandi of the controversial kickboxer has been copied on Instagram in recent weeks by Filip Sulík, the son of the Minister of Economy.

The young Sulík refers to women with a higher number of sexual partners as women "with lower market value", makes expressive comments about sexuality and has even repeatedly clashed with several well-known women. He exclusively prefers "submissive women who don't need much convincing," and his provocations cause a stir on social media.

We wondered whether Slovakia is a specific country where sexist ideas thrive better than in its neighbours. "It is true that Slovakia ranks among Central and Eastern Europe in terms of the level of sexist attitudes among its male and female citizens, where we always see a higher prevalence of such thinking according to Eurobarometers," explains researcher Valkovičová.

According to a 2017 Eurobarometer survey, for example, 25 percent of Slovaks polled considered it "absolutely unacceptable" for men to cry. As many as 83 per cent of people surveyed agreed with the statement that women more often than men make decisions based on their emotions. Up to 73 percent of people think that the most important role of a woman is to take care of the home and family.

Sexist attitudes are brewed at a pre-school age

According to Valkovičová, sexist behaviour patterns begin to emerge in Slovakia as early as childhood. "I think that sexist attitudes start brewing in our country already in pre-school education - from saying things like 'boys don't cry' and 'girls should be nice and quiet'. Many people are able and willing to propagate such stereotypes, and have no regard at all for how hurtful and unhelpful they can be," she reflects.

Valkovic points out that views presented in public space, whether on the internet or in the everyday world, can influence people's behaviour. "When sexist or homophobic rhetoric repeatedly appears in public space, there is also an increase in violence or harassment against women or LGBTIQ people," the researcher explains.

She points out that in the past, for example in the United States or the United Kingdom, incidents of physical violence against ethnic minorities have increased after Donald Trump won the presidential election. The Brexit campaign for the UK to leave the European Union also had this effect.

Does Andrew Tate cause more hate being directed at women?

Andrew Tate attracts young men to his Hustler's University, whom he teaches to make money, seduce women, but few people realize that among the main draws to which he attracts potential members of his "success group" is copywriting.

In practice, this means that what Tate narrates on streams, the guys are tasked with spreading on social media in short, punchy videos with subtitles that have a chance to resonate with new audiences. Tate's content is currently spreading so actively that it's being picked up by algorithms and often recommended to random people on Tiktok and Instagram.

The more this content spreads among people, the more one might expect that Tate's views might impart values and change behavior to young people. According to Valkovic, it is currently impossible to say that women experience significantly more harassment online because there is not enough data to draw such conclusions.

"Slovakia already had surprisingly bad numbers in 2014 in a survey of women about their experiences of violence and harassment. The European Union average was 11 per cent, in Slovakia it was 17 per cent. Cyberbullying, sexual harassment and social media-mediated violence among children is a hot topic as more and more children have access to online space," Valkovic warns, saying that sharing nude photos or blackmail is now widespread among children.

According to the researcher, Slovak women often experience harassment, stalking or verbal violence in the online space. "I think this may be the reason why many women have stopped appearing on Facebook and socialise mainly on Instagram, where they try to create safer online bubbles," she says.

What if ridicule and hate are mirrored in reality?

However, spreading sexist views on the internet is only one side of the coin. It can be much more serious if Andrew Tate manages to influence his followers so much that they begin to modify their behaviour in everyday life, where they no longer hide behind the cloak of anonymity.

"It's one thing to have the rhetoric of hostility or benign sexism, and then there's the actions that flow from those attitudes. Yet research on sexual harassment and violence since the 1980s and 1990s has shown that men who perpetrate sexual violence or harassment have very little in common - they are a very diverse group," Valkovic says.

Social status or position does not play a role in whether a man commits violence against women, according to the research. "However, we do find overlaps in their views of women - research confirms that men's anti-feminist and sexist attitudes also increase their chances of perpetrating violence or sexual harassment against women," the researcher points out.

Feminism is a recurring theme in Andrew Tate's videos. "When a woman was making $100,000 a month, I gave her 25 percent of the money she made. She got 25-thousand and I got 75-thousand. Some people tell me that this is an extortion and why I paid them so little. Little? I'm the genius who thought it up, I'm the technological backer, I'm the emotional support, I'm the one who told her what to say and do. She's just the face of it all. I'm the feminist," she says in a video describing her business model.

There is also a disturbing sense that Tate doesn't think women are to be discouraged because they are property that he must protect, and they are far from equal partners in a relationship. According to Valkovic, there are many definitions of feminism, but Tate doesn't fit into any of them with her views.

"One of the best definitions, by bell hooks, is that feminism is a movement that fights to end sexist oppression and exploitation, but alongside that it also takes into account racism or disadvantages arising from class inequalities," she explains.

Valkovic sees the point of feminist thinking as trying to achieve "fair pay" for work of equal value. "Therefore, it is not logical to compare how much he pays the women who work for him and how much these women would earn at McDonald's. Feminist thinking is not limited to salaries and who all gets into management positions," she continues.

"Sexism, like racism, is about hierarchy - it's based on the assumption that someone is more than others, someone should have more rights and privileges than others. A person who claims about women or men that they can't or don't have something just because of what set of sex characteristics they were born with is a sexist," Valkovic concludes her assessment of Andrew Tate's ideas.