Netflix Released The First Trailer For Movie The Gray Man. It Was Shot In Prague And Stars Chris Evans And Ryan Gosling.

The most expensive movie in the history of the platform will be available on the 22nd of July.

Last summer, the internet was full of videos from an action movie The Gray Man. The most expensive movie from the Netflix production was partly shot in Prague. The Gray Man will have its premiere on Netflix on the 22nd of July and you can already see the first trailer. 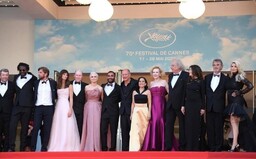 The Gray Man is the most expensive film by Netflix and the streaming service allegedly paid 200 million dollars for it. It was directed by Russo brothers, who also directed Avengers: Infinity War and Endgame.

The Gray Man is inspired by the story from a novel by Mark Greaney from 2009. The main character played by Ryan Gosling is an ex-CIA agent and a hitman who is challenged by his ex-colleague, Chris Evans. Netflix is hoping that the long-awaited film will become a successful action series. We will only find out whether this will be the case on the 22nd of July.