10 Most Anticipated Series And Movies On Netflix, HBO Max, Apple TV+ and Disney+ In May 2022

These are the series and movies we look forward to the most. What is worth watching on these streaming platforms?

While movie theatres keep battling the consequences of the pandemic and their number of  films is far from what it used to be, streaming services are better off. In may, we can expect a number of anticipated series and films. You can read about 10 of them premiering on Netflix, Disney+ and HBO Max below. 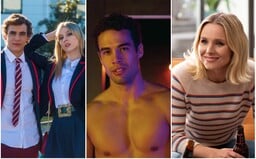 Clark Olofsson is a famous Swedish bank robber. You may not know his name, but he is the reason behind the creation of the term "Stockholm syndrome." It occurs when a hostage falls in love with their abductor, or they at least sympathise with them and willingly help them commit crimes.

In this miniseries by Netflix, we get a closer look at his complicated life and the style in which he robbed banks. His charms and nice behaviour helped him steer hostages towards his side.

The Pentaverate (Limited Series) – May 5th

A 6-episode comedy miniseries focuses on a secret organization who has been ruling the world for centuries. The actor Mike Myers (Austin Powers) plays 8 different characters. Among those are a member of the secret organization, or a journalist who finds himself on a quest to uncover the truth about the operation of the world. The series was produced by Mike Myers and all 6 episodes were directed by Tim Kirby (Fleabag, Brooklyn Nine-Nine).

Animated anthology series charmed us with unique stories and an unusual style of animation in the first season. An anthology series means that every episode is about something else and there is no continuation of plot. In this case, it meant multiple different styles of storytelling and animations, which resulted in a very quality first season.

The second season was slightly inferior, yet still good, so we are looking forward to the third. We do not have a lot of information, but in the case of this series it is best to not find out anything about new episodes and to simply watch them all.

Jackass 4 was a quality comedy, in which a group of friends attempt stunts, or even kind of hurt each other to the amusement of others. The creators decided to use scenes which did not fit into the movie, cut them into a movie and so Jackass 4.5 was born.

Get ready for more stunts and stupidity with Jackass 4.5, an all-new feature film featuring the whole crew! Here’s a small taste of what you can expect when it premieres May 20 on Netflix...

This is the Swingset Gauntlet! pic.twitter.com/IdJDl10mnk

After an almost 3-year break post season 3, we can go back to Hawkins town and the scary world of Upside Down. The plot moves a year ahead, to 1986.

All main characters who have survived the events of season 3 will be back, including Jim Hopper (David Harbour). Among others, the cast will be joined by the actor Robert Englund, who became famous after his portrayal of Freddy Krueger in the horror series Nightmare on Elm Street.

The fourth season of the beloved sci-fi/fantasy series on Netflix will be released in two waves. The first will be released by the end of May, while the second part will arrive to Netflix  in July. In the first trailer, we could see amazing scenes with a lot of action and horror.

It is a limited series with Colin Firth and Toni Colette playing the main characters. They play husband and wife in an orderly family, but one day the wife falls down the stairs and dies.

The post mortem uncovers that she has multiple injuries on her body and the police starts investigating the husband and potential domestic violence and subsequent murder. Apart from Colette and Firth, we will see actors such as Michael Stuhlbarg, Patrick Schwarzenegger, Dane DeHaan and Sophie Turner.

The plot follows a young comedian Ava, who has been shunned by the entire Hollywood after making an improper joke about a successful man. An old standup comic Deborah Vance takes her under her wing. During season 1, they were trying to find a way to each other, yet there was always something complicating their relationship.

Hacks has amused us but managed to cover serious and uncomfortable topics. In the series, all actors excel and it is easy to find favourites among the characters despite their many mistakes, bad decisions and hurting others. In other words - they appear authentic.

The Time Traveler’s Wife – May 15th

We want to give this series a chance because, for starters, it was created by Steven Moffat. Moffat is one of the creators of Sherlock series with Benedict Cumberbatch. This novelty was shot based on the book by Audrey Niffenegger of the same name.

The plot revolves around the relationship between Claire (Rose Leslie from Game of Thrones) and Henry (Theo James). They love each other more than anything but their relationship is complicated due to the fact that Henry can travel in time. The problem is that he cannot control it at all and disappears at any moment and reappears in the past or the future.

Chip'n'Dale the Rescue Rangers return in a feature film which is looking pretty good. The trailer proves that it is not merely a cheap shot of a huge studio to profit on nostalgic attempts by creating an average product. Rescue Rangers looks like a fun movie and we like that one of the brothers will be unconventionally animated while the other will have a completely different visual.

The plot is set on planet Tattooine, where Obi-Wan is guarding a small Luke Skywalker. However, he is a Jedi knight whom the whole galaxy is searching for, since it has been taken over by the Imperium led by Darth Vader and Palpatin.

Obi-Wan meets Darth Vader (Hayden Christensen from Star Wars: Episode I and II), but also inquisitors - villains with lightsabers who hunt the Jedi. Not one, but two episodes of the total six will be available on Disney+ on the 27th of May.

Unfortunately, Obi-Wan and Stranger Things premiere on the same day, so it will be hard to pick which one to watch first. Something tells us that only a few can resist the return of Darth Vader and Obi-Wan.