Johnny Depp's Texts To His Doctor About Amber Heard Were Read In Court. "I Can't Live Like This Anymore" He Wrote

The actor is suing his ex-wife for $ 50 million.

Court between Johnny Depp and Amber Heard continues, this time in the United States. Heard accused him of physical abuse and won the court in Britain, which called Depp a rapist. Hollywood actor is now suing his ex-wife for $ 50 million for defamation of character. 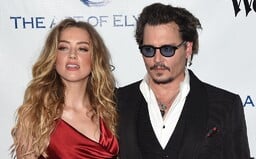 According to the actor, his ex-wife is lying and used false evidence for her claims. According to Mirror, messages sent by Depp to his private physician David Kipper were read at Monday's court hearing. He definitely didn't hold back.

He doesn't paint the best picture about his life with the actress. "I can't live like this. (...) I am finished. I can't do this anymore. All I hear from this malicious, evil and vindictive b**ch are insults" Depp wrote to his doctor. The actor added that Heard had treated him disgustingly and was extremely selfish.

After accusations from his ex-wife surfaced, Depp was boycotted by Hollywood and lost several acting roles, including the role of Gellert Grindelwald in the film series Fantastic Beasts, written by J. K. Rowling.