Our Tips for Great Movies and Series Coming Up on Every Streaming Service This August. Including Hulu, Amazon, Apple and HBO.

Boring cinema schedules are once again compensated for by a busy streaming program.

We gotta get used to the fact that even during the summer blockbuster season, it's possible for streaming platforms to simply have a more packed and varied program. Unfortunately, this also applies to this August, which will be a bit weaker in the cinemas, compared to July. This can still be blamed on the coronavirus, so we're definitely not discarding our love for the cinemas just yet. However, we have to praise the streaming platforms for preparing a whole lot of goodies for us in August. 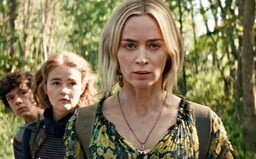 Vivo is a little monkey wanting to fulfill his musical dream. The animated film is packed with music and various melodies. The individual songs were composed and sung by Lin-Manuel Miranda, the producer of musicals such as Hamilton and Into the Heights. We don't know much about the story itself, as Netflix still hasn't released a full-fledged trailer, there are just a few short samples of the music.

Directed by Kirk DeMicco (The Croods) and Brandon Jeffords (Cloudy With a Chance of Meatballs 2), so we are really looking forward to their new project. Finally, a little known fun fact is that VIVO is the third animated film sold to Netflix by Sony (Columbia Pictures). The first two were Mitchells vs Machines and Wish Dragon.

We love John David Washington very much, so we most certainly wouldn't pass on his latest action thriller. Washington plays a guy named Beckett, who's vacationing in Greece with his wife (Alicia Vikander). After the car accident, Beckett wakes up in the hospital with a broken arm and a missing wife, whom no one seems to know anything about.

The police questions his testimony as well, so he decides to head over to the crime scene. However, members of the police start shooting at him there, so he has to flee and fight for his life. His goal is to get to the American embassy and find out what is the reason the police is trying to kill him for.

The story focuses on the family-based Ray (Momoa), who wants to avenge the pharmaceutical company. They withdrew a drug from the market that could have saved his dying wife from cancer. Ray refuses to accept that, so he decides to take revenge on the company. He quickly discovers that he is entangled in a huge conspiracy and the life of his family is in danger.

The trailer surprisingly reveals more dramatic and emotional moments, but of course it is also packed with a lot of action. Director Brian Andrew Mendoza has previously produced three films with Momoa, which were barely average. We believe that this feature debut will be much better than that.

The Witcher: Nightmare of the Wolf – August 23rd

Vesemir is an older Sorcerer and Geralt's mentor. In the 2nd season of the series, he'll have an important role, but we'll get to know him as a young Sorcerer, who's pretty stuck up, sexy, cheeky and ready for action (so the exact opposite of Vesemir, whom we all know and love).

It's hard to say why Netflix decided to introduce this character to the audience in such way, but we won't draw any conclusions before actually watching the film. It will be animated, so you can look forward to somewhat crazier action and bolder design of monsters.

The 3rd season of a successful comic series from the world of DC will once again introduce new heroes and villains. You can start looking forward to Barbara Gordon, Scarecrow and Tim Drake. Many are curious about how Jason Todd's transformation into Red Hood will take place. Apparently, in the 3rd series of Titans, a lot is going to happen and it will also have an impact on adult heroes and villains.

At HBO max, you can also anticipate the romantic-erotic reality show FBoy Island.

The dramatic series Nine Perfect Strangers by Big Little Lies will be introduced to us by the legendary Nicole Kidman. On top of that, we'll follow the rest of the 8 characters in individual episodes, as the name implies. They will move away from the busy city for 10 days and come to relax and let go of stress and responsibilities in a wellness resort.

They have no idea what they'll eventually experience in that given location. In addition to Nicole Kidman, we'll see actors such as: Luke Evans, Bobby Cannavale, Melissa McCarthy, Michael Shannon, Samara Weaving, Regina Hall and many more. So, if you fancy a good dose of suspense, mysterious story and great actors, this series will probably incite you.

We still haven't seen the official trailer, so we're not exactly sure what the final series of this successful sitcom will be all about. Unfortunately, since the story focuses on police officers, the series had to end after last year's protests against police brutality in the United States. The creators rewrote the script and recorded the last episodes with the characters that we've become so fond of over the years. Fans are hoping for a final halloween heist and we hope that the series will end in high quality.

Archer is an excellent animated, comedy series about a bunch of spies. Previous series were carried in a mild sci-fi style, when a certain character was in a coma and we had a chance to experience strange storylines and stories, which took place in her head. But we've been back in the real world for some time now.

The creators also had to come to terms with the fact that the protagonist Jessica Walter (Malory as Archer's mother) died in March this year and we do not yet know exactly in what way this had affected the 12th season and the future of the series. Either way, the 12th season will have 8 episodes.

Hulu has an unusually powerful month. In addition to these 3 picks, you can look forward to other projects, such as American Horror Story: Double Feature, Reservation Dogs or a special animated episode Pen15.

If you were lucky and your local cinema screened Annette, congratulations. The rest of us will have to settle for TV. Annette talks about Henry the stand-up comedian (Adam Driver) and the opera singer Ann (Marion Cotillard). The couple leads an amazing and loving life long after they get together, but everything turns upside down the moment their daughter Annette is born. It turns out that she has a mysterious ability. Annette is a dramatic musical that received high praise at the Cannes Film Festival.

Coda is probably the most anticipated August film in our neck of the woods. The film scored at the Sundance Film Festival, where it was bought by Apple for $25 million, which is the festival's all time record high. CODA stands for Child of Deaf Parents. The title of the film also describes its main character - 17-year-old Ruby.

She is the only one without a hearing impairment in her family consisting of parents and her brother. Everyone else is deaf, so she helps them all of the time, especially in their fishing business. But what happens when a girl finds her first life goal and passion that goes beyond her family and their needs? In high school, she gets fascinated by singing.

She soon has to decide whether to pursue her goal in music or stay at home to help her parents. The film has extremely positive responses, and after watching the trailer, it is clear to us that it will not be average by any means. The trailer below beautifully illustrates that thi will be an extremely personal and emotional story. Directed by Sian Heder, who had previously shot the acclaimed Tallulah drama.

In addition to the 2nd series of Ted Lasso, viewers can also start watching the 2nd season of See in August.

Bonus: Disney+ and its Marvel

Marvels 'What If?' did not fit into the TOP 10, but we are aware of how many Marvel fans are out there, so we remind you that they'll start broadcasting the first animated project in August. By the way, Marvel Studios is setting up its own animation studios to create more projects of this kind. Soon we may get to the point where we see more than 10 movies and series a year from Marvel Studios, feature or animated.

It will have 23 shorter episodes that will deal with alternative events in the MCU. Basically, it will be a Multiverse of unlimited possibilities, so anything can happen in the individual stories. It will have no effect on the story and events of other projects in the Marvel Cinematic Universe. Among other things, we will see Peggy Carter as Captain America or T’Challa as Star-Lord

Disney + will continue with other episodes of animated series, such as Chip’n’Dale, Monsters at Work, Star Wars: Bad Batch and more