Johnny Depp Is Selling An NFT Portrait Of His Daughter Over Whose Face He Wrote The Word "Silence".

The interest in the actor's NFT collection has increased after the delivery of the verdict in the lawsuit against Amber Heard.

Johnny Depp is selling an NFT of his daughter Lily-Rose whom he has always had a close relationship with, but who has faced hateful comments from Depp's fans during the lawsuit against Amber Heard, informs Buzzfeed News.

Depp has announced his own NFT collection Never Fear Truth in January, which contains portraits of family members, friends and personal idols painted by the actor.

„My activity on the NFT market is only just beginning,“ said the actor when introducing his collection. After the delivery of the verdict in the Amber Heard lawsuit, not only has the interest in the collection grown, but also the price of individual pieces has increased.

The actor has created artwork of people he knows that is described as being “an intimate reflection of their character in Johnny's eyes; a portrayal of how they have revealed themselves to him.” https://t.co/yOaJgKnCM2

Lily-Rose Depp, the actor's daughter, has not stood up for her father during the recently closed case. She has not expressed her support for him and has not made any posts on Instagram defending him, which many fans considered a betrayal and cowardice.

However, the actor claims to have a close relationship with his daughter. When Amber Heard first made accusations against the actor in 2016, Lily-Rose publicly stood up for her father in an Instagram post. "My father is the kindest person I know, he never was anything else but a great father to me and my brother. Everyone who knows him would say the same, she wrote at the time.

Speculations have started about whether their relationship has not been harmed. The NFT painting of Lily-Rose could be a clue. The actor states that all pieces in the collection should "capture the reflection of the individuals' character." 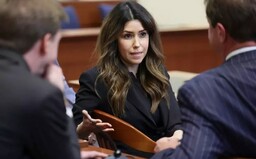 The actor wrote the words "silence. exile. cunning" on the portrait of his daughter. On top of that, Depp added that "words are losing power". These three words are tattooed on the actor's left arm and they come from a book by the poet James Joyce.

However, people see the fact that Depp wrote the words on his daughter's face as a sign that Depp is hurt by her behavior in the last few months and that she was silent instead of expressing support. Neither Depp nor his daughter Lily-Rose have not commented on the meaning of the words and phrases from the NFT collection.