REVIEW: Doctor Strange In The Multiverse Of Madness

Did the director of the original Spider-Man trilogy make a distinctive and original Marvel film? The answer may surprise you.

We were pleased when Sam Raimi (Spider-Man, Evil Dead) replaced Scott Derickson as director of Doctor Strange in the Multiverse of Madness. After looking at the film, we can say unequivocally that he carried his directorial signature into second Dr.Strange.

The directors of Marvel films have to follow certain templates, due to which most of their films look similar in many respects. Nevertheless, Raim managed to shoot a brutal and depressing Marvel. 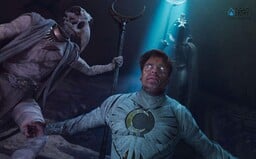 Sequel to Wandavision and Doctor Strange

Second Dr.Strange film focuses on both on continuation of Doctor Strange story, and serves as the sequel to Scarlet Witch, describing the events after the Wandavision series. If you want to enjoy the film to the fullest, it is important that you see Wandavision as well. In the show, Wanda created her children with the help of magic, and she lost them again, at the end of the series. Immediately afterwards, she decided to master the spells from the forbidden book, and it was clear that she was beginning to behave like a villain.

The biggest problem with the film is that it does not follow the Wandavision series very well. Director Sam Raimi admitted that he didn't even see the show. Actress Elizabeth Olsen (Wanda) said they tried to maintain the continuity of the story, but they failed. After watching Doctor Strange 2, you ask yourself: What did Wanda learn from the events of Wandavision? The answer is nothing.

The screenwriters completely ignore the final episodes of Wandavision, in which Wanda came to her senses, and cleaned up the mess she made with her magic. The ending of Wandavision, and the Dr.Strange plot are not in sync.

A minor disappointment is the character of Doctor Strange himself, who has hardly changed at all. The character's behaviour is almost the same as in the 2016 film. The events that transpired since the first film, seem to have brought almost no character development. The creators tried to do so, using the storyline with the love of his life Christine (Rachel McAdams), but her character is uninteresting and honestly, she didn't play a significant enough role in the film.

She last appeared within the Marvel world six years ago and seemed non-existent ever since. The viewer does not feel like she is very important for the story or the Strange itself, so the romantic storyline between them is weak and does not work.

Fortunately, there is the character of Wong, who is gradually becoming one of the best characters in the Marvel Universe. We also liked America Chavez as a new heroine, whose ability is opening a multiverse and traveling freely through different dimensions. She is at the center of the action. Demons follow her who want to gain her ability. Within the events of the film, she falls into the dimension of "our" Dr.Strange.

Together they travel through the multiverse, meeting new but also old characters in different versions and trying to find a way to defeat an enemy who is several times stronger than them.

Sam Raimi was the perfect director for Strange's sequel. He makes great use of his horror roots, depicting the escape of weaker heroes from a strong, bloody enemy.

This film is by no means a horror film, but it contains several jumpscares and scenes that can disturb the viewer. Most of them have succeeded, but some seem to have been there to create a horror atmosphere. We were also a bit hampered by cliché and sometimes slightly embarrassing scenes about the newly acquired self-confidence of the heroes. However, the positives in this case far outweigh the negatives.

Creative visual of the film

At the same time, Raimi makes full use of the opportunity to be absolutely creative with the audiovisual. Thanks to his magic and reality-breaking, Doctor Strange presents the distinct opportunity to bend the laws physics and create unconventional shots. In this respect , the second part is even better than the first, and visually captivates you with several amazing sequences. Especially the transition through multiverses or Strange as a zombie is a feast for the eyes.

There is also a brilliant scene in the film, during which the creators use the soundtrack to the film as a physical aid in the action duel. We haven't seen anything so creative, original and well-crafted in cinemas for a long time. It is a perfect fusion of sound, visual tricks and images.

We rarely praise acting, when it comes to Marvel films. In this case, however, actress Elizabeth Olsen deserves praise, as she delved even deeper into the plight of her character than she did in Wandavision.

The most common negatives in Marvels are indistinct soundtracks and boring villains. However, when watching Doctor Strange 2, there is no way this is a problem for anyone. Danny Elfman, who has already worked with director Raimi on the trilogy about Spider-Man, took care of an amazing musical score.

Doctor Strange 2 was originally scheduled for release, before Spider-Man: No Way Home, as it would serve as an introduction to a multiverse with popular Marvel characters from previous movies and series. Several such characters do appear, but the speculation about Tom Cruise as Iron Man have been massively exaggerated, so tame your expectations.

Doctor Strange in the Multiverse of Madness is a successful Marvel film and a fun, action sci-fi movie. Director Sam Raimi took care of the original and creative visual. The actors, soundtrack and visual effects deserve praise. Comic fans will be very pleased with the multi-verse cameo appearances.

However, the development of Wanda and Strange's characters was not very successful and the film lacks a functional emotional and romantic line. The creators are trying to make them happen, but falling short. Some viewers, will wish the film to show more of the multiverse and its different versions of popular Marvel characters.

Doctor Strange 2 is a film focused on a strong and expressive audiovisual cinema experience with creative direction and scenes that will excite fans. Although the screenplay betrays it a little bit, it is a success.