Explaining The Last Episode Of Moon Knight And The Post-Credit Scene. Did The Show Change The Marvel Universe In Any Way?

Disney's Moon Knight series ended after 6 episodes. What happened at the very end?

Moon Knight ended after six episodes and the ending brought us answers. However, most of them could have been guessed by the viewer while watching the previous parts.

It is important to know that the scenes in the psychiatric hospital were not real, or more accurately, did not represent the real reality in which the characters live. It was a place where they escaped the reality that was hurting them emotionally. 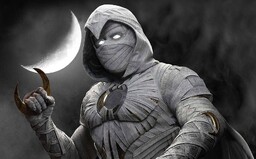 There are at least three different personalities in Marc Spector's body. The first is the original - Marc Spector. Marc left his parents after his mother started hating him, abusing him emotionally and physically for many years.

She blamed him for the death of Marc's younger brother, who drowned in a cave where Marc dragged him. Trying to avoid being abused by his mother, Marc created a second personality - Steven Grant. He created him based on a popular film, the main character of which was the fearless adventurer Steven Grant. Whenever his mother was about to beat him, he passed control to another person.

The series said that Marc wanted to protect Steven from all those battles and screams from his mother. But it wouldn't make sense if he left his control of the body to Steven in every battle, wouldn't it? Plus, Steven didn't even remember any of it.

It would make sense to assume, that there was also a third person. The creators referred to it several times during the series, but we didn't really see them until in the post-credit scene at the end of the sixth episode. It's Jake Lockley.

Who is Jake Lockley from the post-credit scene?

In comics, he is a taxi driver who obtains information for Moon Knight directly "from the street". He was really tough in comics, but he wasn't a particularly bad man or a cold-blooded killer, as the creators of the series have presented him so far.

However, they also changed the personalities of other characters, such as Moon Knight himself, Marc Spector, Mr. Knight or Steven Grant. So we can't really navigate this based on comics at all, as every character and personality in the series is different.

Jake Lockley took control of Marco's body several times during the series. It was most obvious when Marc and Steven didn't know what had happened in the past. When they "woke up", they found only corpses around them. It was the work of Jake Lockley, who does not take control of the body at any random time, only when the situation is really critical.

Jake is a cold-blooded killer. His personality could have been affected by his mother's abuse, and so he experienced nothing by pain, anger and hate.

However, we still do not know his character or the motivations that lead him to cooperate with the god Konshu. Although he gave Marc and Steven the freedom, he continues to work with Jake, so Marc Spector's body remains tied to Moon Knight's identity (although Steven and Marc may not even realize it).

At the same time, neither of them realizes that there is a third person. However, we think that Marc knows about him, but refuses to tell Steven, or that he subconsciously buries these memories and knowledge deep in his mind. Given the end of the series, it is clear that we will meet Marc and the others again. The second series is therefore more or less certain.

Layla is a new Egyptian hero

We will most likely see Layla as well. In her case, it is possible that the Marvel studio created a completely new and original heroine who has no origins in comics. Marvel claims that this is a new version of the character named Scarlet Scarab, even though the director did not want to confirm it.

We don't know what skills Layla acquires after becoming the avatar (messenger) of the goddess Tawaret (the hippo from the fifth episode). So far, it seems to be a classic case of increased strength and other human qualities, which together with the flying costume make her a superman.

Prior to the premiere of the series, there was speculation on the Internet that Ethan Hawke was actually playing Dracula and that the character of Blade, played by actor Mahershal Ali, who will get his own film in the following years, would also appear in the end. However, if you saw the last episode, you know that nothing like that happened and it was false information.