Female Thor, Film's Villain And Guardians Of The Galaxy. Who, Why And Everything Else You Need To Know About Thor 4.

What do we know about Thor: Love & Thunder? New Marvel film is full of secrets

Thor: Love & Thunder is a long-prepared and long-anticipated comic film whose production has been postponed several times due to the pandemic. The Marvel studio announced its production in July 2019. After almost three years, fans saw the first shots of the film, and it is clear that the creators did not want to show too much from the film. We wouldn't be surprised if most of the teaser trailer footage came from just the first half hour of the film.

The official synopsis of the story says that Thor is about to take a spiritual journey to find himself and find inner peace. The constant fighting and rescuing of planets and universe upset him, and he needs some rest. One of the scenes in the trailer seems to be referring to this, when The Guardians of the Galaxy prepare to attack and Thor turns his backs and walks away. But what are The Guardians of the Galaxy doing there? 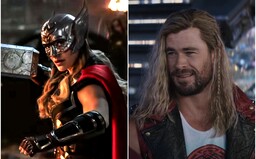 Thor met and befriended them during the Avengers: Infinity War and Endgame events, and at the end of Endgame he flew into space with them. Previous speculations have said that the Guardians of the Galaxy will only be at the beginning of the film, and then go on, take their own adventures. Thor sets out to search for peace, but encounters other problems. He will be accompanied by his friend Korg (played by director and screenwriter Taika Waititi).

The arrival of the Greek gods led by Zeus and perhaps Hercules?

We don't know yet, who Thor will meet first, whether it will be Zeus (Russell Crowe), the female version of Thor (Natalie Portman) or the villain Gore the God Butcher (Christian Bale). From the teaser, we seem to notice Russell Crow as Zeus at the Greek Olympus. Thor: Love and Thunder will probably incorporate the Greek gods into the story. For example, the character of Marvel's Hercules is very popular, especially for his relationship with Thor. So maybe we'll see him in this movie.

Female Thor originated in the comics

The female version of Thor is not so unique. In both the comics and the film, Thor's female version will become Jane Foster, Thor's first great love. She is played by Natalie Portman, who has trained a lot because of the role. In the teaser trailer, she holds a Mjolnir, Thor's original weapon, which was destroyed by his sister Hela in the film Thor: Ragnarok. It is possible that when Jane became worthy of the weapon, Mjolnir repaired itself and chose her as the next successor.

We will probably find out, how exactly the two Thors work together, once we see the film. In comics, Jane becomes a worthy of Mojlnir after Thor loses this ability. Hammer chooses her at a time, when Jane is battling breast cancer and is ill. Female and male Thor have similar abilities.

Christian Bale is going to smash it as Gorr. Thor 4 is going to be WILD 🔥 pic.twitter.com/F2n0jdMxYH

We do not see Gor the God Butcher villain in the teaser, but what we do see, are the consequences of his actions. The film identically replicates a well-known page from a comic book, where Gor first appeared, leaving behind only the bodies of dead gods and creatures.

It is possible that they will be the target of the villain Gor the God Butcher. He first appeared in a comic book in 2012. His goal is to kill all the gods who did not prevent the death of his family. Christian Bale had to have his head shaved for the role.

Gor has no superhuman abilities. However, he has lived for thousands of years and is a very capable warrior who can deal with the gods just fine. If he has a symbiote called All-Black the Necrosword, he can even be physically stronger than Thor.

Melissa McCarthy as Hela, Matt Damon as Loki, Sam Neil as Odin and Luke Hemsworth as Thor will aslo play small roles in the film. The beloved characters didn't get new actors. It will be a theatrical performance as we saw in Thor: Ragnarok, when it was organized by Loki disguised as Odin.