Marathon of fashion shows of established Czech and Slovak designers, brands, and up-and-coming talented designers. The biggest Czech & Slovak fashion event Mercedes-Benz Prague Fashion Week 2022 saw the return of past decades, a walk around Hollywood or luxury outfits with a strong message.

During the shows for the fall / winter 2022 season, we had the opportunity to see collections of designers such as Pavol Dendis, Michael Kováčik, the well-known CzechoSlovak brand Laformela, founded by Miroslava Kohutiarová and Antonín Soukup, or Vanda Janda and her Hollywood Walk of Fame.

Refresher could not miss this Prague Fashion Week. We bring you a report and photos of street style from all days of MBPFW 22, which, with its originality and creativity, transported us to some of the biggest fashion events of the world's capitals. There was no lack of luxury elegance and extravagant fashion. In the gallery can also see photos from the backstage of this fashion event. 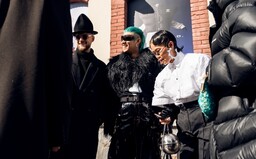 On the first day, the Slovak designer Michael Kováčik started the show with his androgynous collection called Story Telling. He worked on it for several long months and did not want to use it to set standards, guidelines or rules. He is, he is satisfied with the responses to his work.

"Every day of our lives is a unique experience that interconnects countless occurrences. It is in our hands, to set the tone for how we will survive, what we will wear and what role we will play on any given day,” says the designer. As the director of the Miss Slovakia beauty contest, he also saved a seat in the show for the crowned beauty queens Sofia Hrivňáková and Leona Novoberdalia.

His collection is full of hand-knitted sweaters, deconstructed coats, oversized sleeves complemented by fine earrings or bracelets, which brought a legacy of fine tailoring to the catwalk on the Prague Market Square.

"The collection does not divide, quite the contrary, it combines the best of both worlds of subtlety and austerity, which can perfectly enrich each other," reveals Kováčik about his new collection. When creating the catwalk, he relied on the well-known motto "there is beauty in simplicity". The viewers' attention was focused primarily on the collection itself.

Opening day of the show ended with another established Slovak designer Pavol Dendis with his Burning Heart collection. Collection is inspired by his previous Dark Waters-Brave Youth collection and 80's music. The diverse collection contained several types of fabrics such as wool, denim, fine silk and viscose.

"I shifted the mood, the playlist and the colour scheme. The collection is more delicate, but at the same time it maintains the right dose of rawness and rebellion. I, once again, focus on details, tailoring and new silhouettes. It contains women's and men's models, which are, however, very unisex," reveals Dendis.

In the new collection, he presents a strong woman and a gentle man. According to him, the heart of both can ignite with an undisguised feeling and a desire to address the world with their own identity. "I want to focus on the shift I feel in my personal and creative life. Stay true to my aesthetics and intuition, but look beyond the new horizon,”  he adds.

"The collection represents my current interest in 80's music, freedom and my current mood. I want to present a minor change, but still my own authenticity. The collection was created relatively quickly and intensively, which, I think, can also be seen in the overall atmosphere.

I am glad that even with the change in colour and cuts, I managed to introduce people to an original author's collection, which carries my handwriting and is again a bit better than the previous one. I don't try to copy the trend, but I want my collections to be up-to-date and my clients to feel comfortable and stylish," said Pavol Dendis for Refresher.

He also added that he is satisfied with the responses. "I think people are used to my aesthetics, they know what to expect, and I always try to surprise with something and do a show at the same time. This time it was pink models and confetti on the catwalk. I want the audience to have an experience not only from the collection, but also from the entire show."

Laformela has its own world

On the second day of the show, students from the Academy of Arts, Architecture and Design in Prague, TBU in Zlín and the Technical University in Liberec were given the opportunity to show their talent. "It's easy to follow trends and then create clothes. However, I want my students' work to come from within themselves so that they are genuine and authentic," said Liběna Rochová, who, together with the students of the Clothing Design Studio at the Academy of Arts, Architecture and Design in Prague, presented the collection. According to her, it was not a classic show, but rather a presentation of a fashion image.

However, the highlight of the evening was the awaited collection of the CzechoSlovak brand Laformela, from the creative duo Miroslava Kohutiarová and Antonín Soukup. The magnificent evening show had an unconventional installation, accompanied by a live performance by singer Amelia Siba and multi-instrumentalist Prokop Korb (known as Badfocus), which completed the picture of the entire collection.

Laformela has its own world, which  to the viewer appears as a parallel universe. This was once again confirmed by the new Mainline collection, which defines the CzechoSlovak fashion Olympus. The creators described the collection of "roaring twenties" as a declaration of freedom of the creative process.

During the show, the outfits were complemented by massive metal jewelry from the Belda brand, leather handbags, and Adidas shoes, with which Laformela established cooperation for the current season.

The last - the third day of the show was opened by young talents. The four finalists of the Van Graaf Junior Talent 2022 talent competition presented their work. At the joint show, their collections were presented by young fashion designers, selected by an expert jury based on the submitted portfolios.

Vendula Menšíková, a graduate of the Department of Design at the Technical University of Liberec and a student of the Faculty of Art and Design at UJEP, and students of the Studio of Clothing and Footwear Design at the Academy of Arts, Architecture and Design in Prague - Tomáš Němec, Tobias Schubert and Jaroslav Vích - were among the candidates for the title of the most talented young designer.

The winner was Tomáš Němec with his dark collection "Thank God I'm an Atheist", inspired by the film Lux Aeterna by French director Gaspar Noé. He received a financial contribution for the production of a new collection, which he will present during the fall Mercedes-Benz Prague Fashion Week, as well as PR support for the project.

The final show day was closed by the well-known Slovak designer working in Prague, Vanda Janda, with her Walk of Fame, supported by the Jenny Fairy brand, which is part of the international fashion group CCC. The self-proclaimed diva reassured us of her talents and brought a piece of her infantile self to the catwalk, as we are used to with her work. She remained true to her elegant Barbie look, but brought them to a higher level.

"I consulted the whole family about the creation of this collection. The motif was the stars, which is a very flashy motif, but we figured out how to grasp it differently. We were looking for personal constellations, based on births of the the women that mean a lot to me - be it in Hollywood, which I am presenting, or within my personal life" said Vanda.

She included star symbolism in the fashion show itself. "Who wouldn't want to walk the stars on the famous Hollywood Walk of Fame ?!" The stellar collection made of 100% silk, cashmere and wool brought, once again, a lot of pink, classic A-line dresses from the 50's, tulle veils and a lot of stars and sequins.

According to Vanda, however, these are not just randomly sewn-on sequins. "For example, the pink dress hides the constellation under which my grandmother was born, as well as the women who are my great role models. For example, Sophia Loren or Peggy Guggenheim. Everything was sewn by hand and it took me four months of work," revealed Vanda. 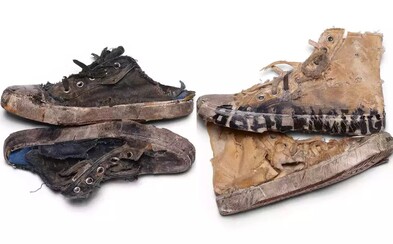 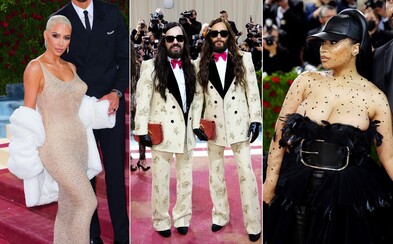 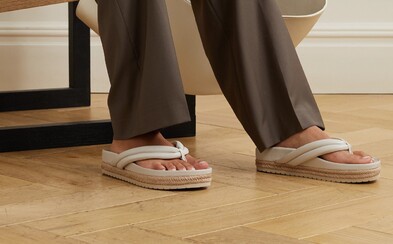 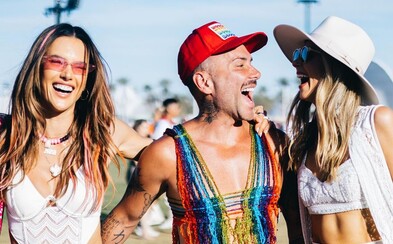 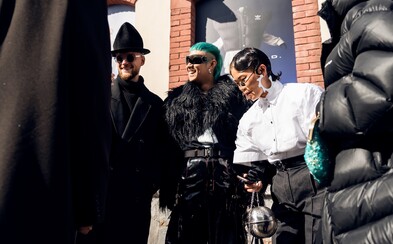 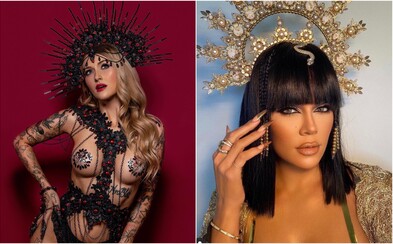 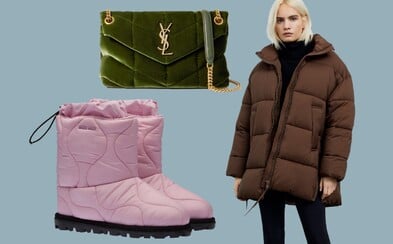