Arcane is Crushing Viewership on Netflix. This Animated Series Will Leave You Speechless

Arcane from the League of Legends is captivating critics and audiences around the world.

From the first trailer of Arcane, it was beyond clear that this project could be very special. However, trailers can often be deceptive, so we kept our expectations low. After the premiere on Netflix, it was obvious that misleading trailer wasn't the case here.

Arcane is the best video game adaptation along with Castlevania (also from Netflix). It is based on real life and the story of LoL (League of Legends). But you don't necessarily have to be familiar with the story of the games to enjoy it. Arcane tells a coherent and independent story of its own with a number of characters and storylines so you won't miss anything. Forget about the games and enjoy the series exciting you from the first episode. 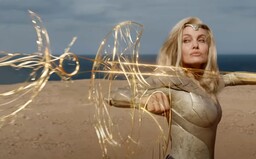 There are a total of nine episodes, and we get three new ones every week. The series is thus divided into three acts, with a significant story shift at the end of each awaiting us. And you better believe, you aren't ready for the finals of the first act. The creators tell a believable story with a real danger to the characters. The tension isn't artificial, the risk is real and the survival of any of the main characters isn't automatic.

Which is heartbreaking, because you will fall in love with all the characters. They differ primarily in whether they live in Zaune or Piltover. Zaun is an "underground" with its own laws, dirty alleys and the people there are poor. Above it is Piltover, a modern, scientifically advanced city that has control over Zaun. Tension between their citizens is constantly growing, which escalates into problems that have been in the air since the very beginning of the series.

Each character is specific and unique in its own way. Gradually we get to know them better and penetrate deeper into their personalities. Arcane's story and characters are much more complex than in most other series, so the characters have more dimensions than what might seem at the first glance. Plot twists in an unexpected direction and successfully manages to avoid several clichés.

Not to mention the wonderful animation, which has managed to bring a lot of life and emotion into the animated characters. Animation excels in movement and action scenes, just as well in ordinary dialogue scenes. Each episode has over 40 minutes and the pace is very fast. At times we'd prefer the characters and the world around them to have more breathing space, as everything happens very swiftly.

However, it can only be a good sign of a world and characters that are so well-built that you long for more and more with each episode. It wouldn't necessarily help the show to slow down, quite the contrary. In this way, it has at least a steady pace and ability to make a solid shift with the characters in a shorter time. The last act consisting of three episodes still remains until the end, and we already can't wait. So far there's nothing to complain about.