Scientists Discover One Of The Best Dietary Supplements For Muscle Growth, New Study Suggests. It Is Oil From A Tiny Crustacean.

A 6 month supplementation with krill oil led to muscle growth and improvement in function.

The secret to strong and functional muscles could rest in a tiny sea crustacean called krill ("small fish" in Norwegian), which is a favorite nourishment among whales and penguins.

A new study published on the 20th of April this year in Clinical Nutrition magazine describes an experiment which brought interesting findings about the effects of krill oil on human muscle.

Over 100 healthy adult men and women over the age of 65 who engaged in a physical activity of their choice for less than an hour a week took part in the research conducted between March 2018 and March 202O.

It was a double-blind, randomized, controlled study. This means that the participants were randomly divided into two groups. One was using krill oil (4 grams per day) and the other received fish oil. Neither the participants nor the scientists knew which group received krill oil.

The scientists measured the strength of knee benders, grip strength, the thickness of outer thigh muscle, the ratio of body fat and muscle, blood lipids, glucose, insulin, and other indicators.

At the end of the experiment, a statistically and clinically significant growth in and function improvement of muscle was recorded. A 6-month-long supplementation with krill oil led to strengthening of knee benders, grip, and the thickening of the outer thigh muscle, compared to the other control group. One of the possible explanations is that an increased intake of Omega-3 fatty acids decreases inflammation, which contributes to the growth of muscle and strength.

„The results of this research prove that polyunsaturated fatty acids with a long chain contained in a dietary supplement could be extremely effective in maintaining of muscles and the function of skeletal muscle which decreases with increase in age," clam the scientists after finishing the study. It could also naturally help those physically active in achieving their fitness goals.

Krill oil is rich in omega-3 fatty acids with a high share of eicosapentaenoic acid (EPA) and docosahexaenoic acid (DHA). Multiple studies have proven that these two essential acids (a body can produce by itself) are extremely beneficial for health of the heart (they lower cholesterol levels), in cases of inflammation or to improve the function of the brain and nervous system. They can also help reduce signs of rheumatoid arthritis and joint pain.

Some studies suggest that these acids have a comparably greater biological availability than fish oil and therefore are absorbed in the bode more quickly and effectively. Oil from this crustacean is therefore a suitable alternative to dietary supplements with omega-3 fatty acids.

The above-mentioned study confirms previous research about the effects of fish oil on the improvement in volume and function of muscles, which marked similar results on a smaller sample of people. Omega-3 fatty acids support protein synthesis, which is a process where consumed proteins turn into fuel we need for growth and retaining strength. 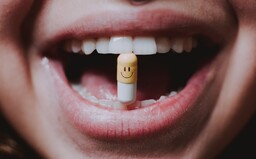 Scientists and nutritional therapists claim that one of the most effective supplements for those who engage in power training is also kreatin. Some studies have even compared it to anabolic steroids but without the negative effects on human organism.

Do not forget that if your goal is muscle growth, no supplement will help you without adequate power training. It is important to keep in mind that there is no guaranteed quality, effectiveness and safety of dietary supplements, compared to medicine. It is crucial to consume a varied and balanced diet in the first place.