VIDEO: 20 People, Including A Small Boy, Were Killed In A Russian Missile Attack Near Odessa

The State Emergency Service has released footage showing firefighters searching for survivors in the wreckage of the destroyed building.

At least twenty people, including a child, were killed during nighttime Russian rocket attacks on the Odesa region in southern Ukraine. This is reported by the BBC portal with reference to official Ukrainian sources.

A Russian rocket hit a nine-story building in the village of Serhijivka near Odessa, in which about 150 people lived. The State Emergency Service reported that sixteen people were killed in this attack. Another four, including a 12-year-old boy, were killed in a separate attack on a recreation center in the village. 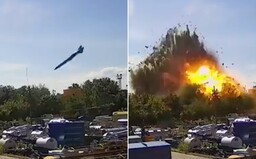 Forty people, including six children and a pregnant woman, are injured. The State Emergency Service has released footage showing firefighters searching for survivors in the wreckage of the destroyed building.