Coolcola, Fancy And Street. Russian Company Produces Replacements For Coca-Cola, Fanta and Sprite After Brand Leaves Due To War

Not only does McDonald's is selling its business in the Russian Federation. In response to the Russian invasion of Ukraine, brands such as Coca-Cola and Pepsico left the market in early March, so Moscow set out to look for alternatives to popular sodas to meet growing demand, writes the Financial Times. 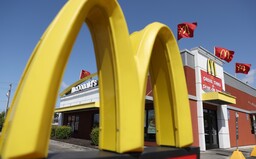 The popular brewery Ochakovo has recently solved the dilemma of the Russian population, who was wondering what drinks to start drinking instead of popular American brands. The brewery is known in Russia mainly for its beer, but on Monday, it announced that it was starting to produce sodas called Coolcola, Fancy and Street.

The Russian brewery - Ochakovo launched soft drinks - CoolCola, Fancy, Street (and filed trademark application), since Coca Cola left the Russian market passig off was a matter of time... well these bottles are similar to Cola, Fanta, and Sprite#trademarks #tradedress pic.twitter.com/Ff0kQldmqR

It is clear at first glance where the brewery got its inspiration for the design of its new drinks. The Coolcola bottle is strikingly reminiscent of the blue Coca-Cola package from the Pepsi label, while the Fancy is an almost identical imitation of the Fanta. Street will be popular with the fans of soda Sprite.

Even after the introduction of a new series of drinks, Ochakovo Brewery asked the Russian authorities to register the trademark of all three names. On the official website of the brewery, you can check out the details about the composition of drinks, but also the available sizes, which, according to published information, are 0.5 and 1.5 litres.

Ochakovo communicates openly on his website that thanks to Coolcola, people can enjoy a familiar taste. "A distinctive and refreshing drink with the cult taste of cola," writes the brewery.

In the case of imitations of Fanta and Sprite, the website no longer mentions any specific brands. They describes Fancy and Street drinks as "classic flavours of your favourite soft drinks," which are said to "perfectly quench your thirst and allow you to freshen up."