Alcohol Destroys Your Psyche, Performance and Sex Life. How Do You Find Out if You're Addicted?

We all know that excessive alcohol consumption can have an immense impact on our health. This article zooms in on the influence it can have on various aspects of life.

The pandemic didn't stop people from drinking alcohol, quite the contrary. During the lockdown, many chose to drown their sorrow and frustration in a drink at multiple occasions. In addition to the feeling of relaxation or increased self-confidence, there are many side-effects associated with alcohol. Addiction is one of them. According to doctor Okruhlica, more and more young people between the age 20 to 30 are enrolling in drug treatment centers. At the same time, the number of female alcoholics is increasing.

"Gender differences in the number of alcohol addicts are leveling off. These days, women no longer need to drink in secret," says the doctor. He adds that young people and women are now facing a lot more pressure.

One for the road

Alcohol is part of our culture. We've been aware of it since we were little. We see parents drinking beer while watching TV, older brother getting drunk at graduation, it's kinda hard to imagine social events such as prom, teambuilding or wedding without the booze. Just remember the good old saying "one for the road."

"Alcohol brings down the barriers and reduces anxiety. People are thus more relaxed in social situations," the doctor explains. "However, if someone goes to these social events often, their alcohol tolerance begins to increase. One beer is no longer enough, they gradually need two or three to get to a certain level, " he adds.

To remain sober in a society where everyone consumes alcohol may seem like a mission impossible. One often doesn't want to be the only one who does not drink. In that case, it really is a matter of strong will.

However, you must also be careful about "harmless" drinks to melt the stress away before the rehearsal or performing in front of the audience, for example. "Many actors became addicted to alcohol just by always having a drink before the performance," says doctor Okruhlica.

We often use alcohol as a tool to overcome anxiety, which temporarily recedes, but we may become addicted instead. According to experts, we can also overcome anxiety with the help of psychotherapy, which teaches a person to manage it without alcohol. 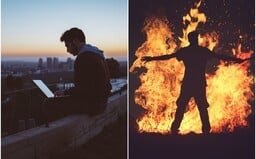 When we drink alcohol, our heart rate speeds up and our blood pressure rises. We may start to sweat and even feel hot flashes. Since alcohol acts as a sedative and a mild anesthetic, it causes the feeling of well-being or euphoria in the brain when consumed in moderation.

"In higher quantities, problems with speech or coordination may arise, a person can become aggressive or sleepy," explains the food chemist Martin Masar. If we continue drinking, it may lead to alcohol poisoning.

These are the facts we know. What's interesting, though, is what exactly happens in the body afterwards.

"The body begins to break down the alcohol to acetaldehyde after ingestion by using the enzyme ADH," Masar describes the process of alcohol consumption. It is a toxic substance that is rapidly oxidized by an enzyme and later converted into carbon dioxide and water.

"A hangover can be caused by several factors, especially by the product of alcohol metabolism - acetaldehyde. At the same time, our body gets dehydrated, and our immune system probably also plays a role in this, ” says the food chemist.

These factors result in us feeling tired, weak, hypersensitive to light, noise, cause headaches, nausea and more. Bad mood or depression are also an option.

Some people manage to break down alcohol very well due to their genetics, so they don't have a hangover at all. Others, in turn, experience such unbearable post-alcohol condition that it completely discourages them from drinking altogether.

"I know people who have to take two days off work, after a weekend celebration," says the doctor.

According to him, it is very risky to get behind the wheel in such a state. People often think that they are no longer under the influence, but it can still easily be the case.

When is it an addiction?

When we say alcoholic, most of us imagine something very awful. "Most people who have an alcohol problem are decent people," says the doctor. According to him, they often don't seek out help because they don't consider themselves to be alcoholics. As a result, they may die of bodily complications associated with alcohol, such as liver problems or high blood pressure. "It can lead to premature deaths of decent people," adds the doctor.

There's more and more addicts between the age 20 to 30 joining the center. He attributes this to the pressure of working conditions, amongst other things. "In the past, people haven't had such demands in their jobs," says the expert.

Although there's a majority of male addicts in general, more and more female alcoholics are looking for help these days. "Women are also under a lot more social pressure. Gender equality sometimes leads to delays in entering treatment. Today, women no longer hide that they drink alcohol, it is tolerated by the society, " he explains. He adds that drinking has not been tolerated with women in the past. People condemned women who drank alcohol, so women were usually resorting to drinking in secret.

Sometimes one doesn't realize whether he or she is addicted to alcohol. "Addiction is when a person can't stop drinking without feeling discomfort," says Dr. Okruhlica. "If they have a problem with abstinence in the first few days already. For example, in the evening thinking: Oh, now I would have a drink, it doesn't feel right if I can't have one," he adds.

It is considered an addiction even when a person can't sleep without alcohol. In Western cultures, it's common to practice an alcohol-free month when you can try out how it feels without it and whether you can make it through. If not, you may have an alcohol problem.

One can become addicted even when alcohol is consumed "decently" in their community. For example drinking something small every day, like prosecco. Addiction like this can easily be disguised, since the society is so pro-alcoholic.

"There are always those people in the society who pressurize others to drink. They are usually those with an alcohol problem themselves," says Okruhlica.

Changes in the brain

In the brain, nerve circuits change as addiction develops. They are related to motivation, excitement, reward and stress. These changes affect the level of dopamine or serotonin in our body.

"With repeated consumption, a shift in sensitivity to the effects of alcohol occurs. This launches the withdrawal symptoms after the interruption of consumption," says the food chemist.

"Cravings" can manifest in shivering, sweating, anxiety, or irritability. A person may become sick or even start to hallucinate. "It is quite difficult to break the addiction. In addition, the treatment often needs to be repeated," says Masár.

Drinking alcohol often increases your appetite for sex or relax the tendency to hold back. "An intoxicated person may have a greater desire for sex and alcohol may increase their self-confidence, but at the same time, alcohol has a negative effect on sexual health itself," explains the food chemist Masar.

People who use alcohol excessively may have problems getting an erection, reaching climax, or reduced libido over the long-term.

Similarly with physical performance, as motor skills and hydration deteriorate whenever alcohol is consumed. "Athletes are needlessly making it harder on themselves when under the influence," says Masar.

The athlete will feel the effects of worse regeneration ability, sleep quality, leading to a negative impact on their performance over the long term. According to the food chemist, no diet combination can help with that.

However, alcohol not only affects the body but also the mind. According to Dr. Okruhlica, it cognitively degenerates. For example, if you work in the creative field and consume alcohol excessively, you will begin to feel your creative abilities deteriorating.

"Not just the memory, but also the conception ability. People start making more mistakes," adds the doctor. These are, for example, artists who regularly drink at work. "It's scary for them to see the difference between five years ago and now."

How to get rid of addiction?

The very first and most important step is to admit to yourself that you may have a problem. Then it's important to seek out experts. "Come to find out where you're at. The treatment is at the beginning, one consultation might really be all it takes," explains the doctor.

You can visit a drug treatment center and be treated on an ambulatory basis. If the condition is more severe, it's also possible to treat it with an intensive form.

Although breaking addiction is difficult, it's certainly not impossible. If you resonated with the article and you feel that you might have a problem, do not hesitate to get in touch with experts to get out of it.